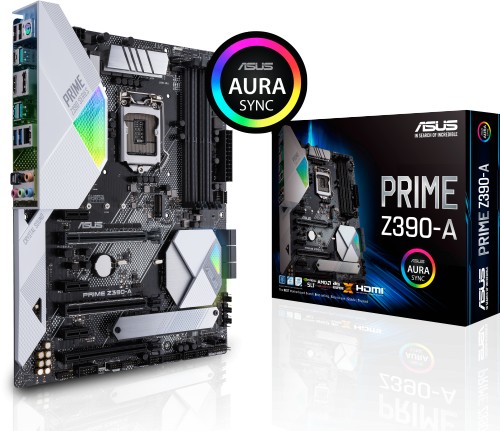 Dressed in professional attire, the Prime Z390 series caters to daily users and content creators with well-rounded specs and features. Combining the benefits of the latest processors with essential ASUS design and engineering, Prime Z390 provides a wealth of options for performance tuning via intuitive software and firmware features.

Tune it your way

Prime Z390 simplifies CPU overclocking with software and extensive tweaking options that give beginners and seasoned overclockers alike the tools to build well-tuned machines. A new memory trace layout provides stability and compatibility for both traditional DIMMs and RGB-infused memory, letting you pair a broad choice of DRAM kits with your build. ASUS AI Overclocking makes automatic tuning faster and smarter than ever before. Available in Windows or directly through the UEFI, it profiles the CPU and cooling to predict the optimal configuration for each individual system.

Take care of complex tuning with just one click. ASUS 5-Way Optimisation is a system-wide tuning utility that overclocks the processor and tunes fan speeds to ensure the best balance between cooling and acoustics. The automated CPU tuning feature of 5-Way Optimisation leverages the same onboard intelligence as AI Overclocking, but goes further by running a Prime95 based stress test to deliver a result that’s well-tuned from the get-go.

The UEFI BIOS is an early waypoint on any PC-building journey, and Prime Z390-A offers one of the best in the business.

Prime Z390-A features the most comprehensive cooling controls ever, configurable via Fan Xpert 4 or the UEFI BIOS.

A well-tuned enthusiast system deserves a matching aesthetic. ASUS Aura offers full RGB lighting control with a variety of functional presets for the built-in RGB LEDs as well as strips connected to the onboard RGB headers. And it can all be synced with an ever-growing portfolio of Aura-capable ASUS hardware.

This is a very simple and smart Board, the music has clearly been looked at and is a real gem...I find the bios very good and have upped the i3-9350K using the AI system in place, but need no more for what I am using the PC for....Looks great in my be quiet 801 Case using Air cooling....

“This is an excellent company offering good advice and a product that fully met my requirements, power and silence. Sssh”